Donald Judd. Art for architecture’s sake. A private view at the chic David Zwirner Gallery in Mayfair. Three floors of white galleries behind a cream façade. Cool as. Next the RCA end of year show at the Dyson Building in Battersea. The gallery with a shop in residence. Unresolved duality. Is it just us or does art exist in a vacuum these days? Charles Saatchi put in an appearance, no doubt hunting for the next Damien or Tracey. Back over Battersea Bridge, a wedding cake cast in iron, walk down Cheyne and check into hospital. Royal Hospital Chelsea. We’ve saved the best till last. It’s Masterpiece, the highest end arts and antiques fair in London reserved for the nought-point-one-per-centers. Boutique Maastricht. 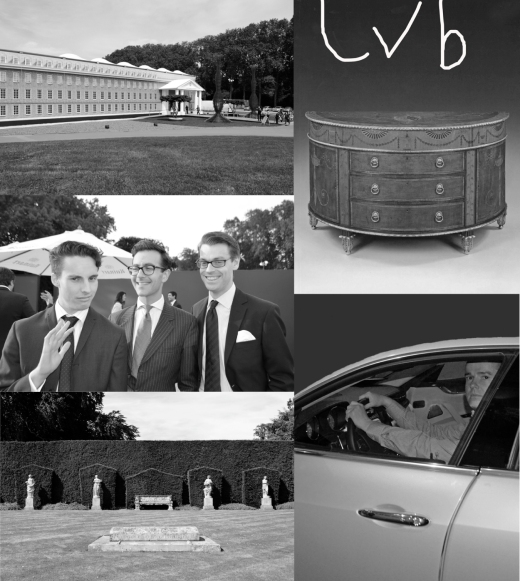 A red carpet over green grass leads to a white pop up portico framing the entrance to a vast marquee, a primitive structure lifted to the sublime by a printed cloak resembling the hospital building: Henry James’ “principle of indefinite horizontal extensions” in canvas. Masterpiece attracts the famous and infamous. Princesses Eugenie and Beatrice walk on by. Anna Wintour’s sharp bob and Zandra Rhodes’ fuschia bob make them both recognisable from behind, surely the key definition of fame. We are joined by leading architect and avatar of heritage today John O’Connell, first director of the Irish Architectural Archive Nick Sheaff, and reductivist artist Suresh Dutt. What’s the collective noun for design luminaries? Coterie?

Now in its fourth year, Masterpiece is a variegated container of uses, architecture, history and technologies, challenging our thinking on design, strategies and the relevance of art – and on the urban importance of aesthetics. It questions artistic predilections and speculates on ideas of time and context. A temporary setting for the permanently magical. First – pit – stop the Ruinart stand, the oldest champagne house, purveyor to the likes of Browns Hotel. Next stop, The Mount Street Deli for beetroot and avocado salad.

The new Maserati Quattroporte on display provides a beautiful distraction. “The design of the Quattroporte is inspired by Maserati’s core stylistic principles: harmony of proportions, dynamic lines and Italian elegance,” explains Marco Tencone, head of the Maserati Design Centre. “It’s been kept simple and clear with a character line flowing alongthe side to define the strong volume of the rear wing, creating a very muscular look. The cabin is sleek with a three window treatment and frameless doors.” Even the engine is a work of art. Next, we call in on Philip Mould who has just sold The Cholmendeley Hilliard miniature, a rare portrait of an unknown lady of the Tudor court, for a not-so-miniature £200,000.

A pair of George III marquetry semi elliptical commodes with Irish provenance is the star attraction at Mallett, that stalwart of Dover Street antiques hub. “All this is very emphatic,” notes John, pointing to the lashings of evidently bespoke detail. Mallett attributes the commodes to the London cabinetmakers Ince & Mayhew. They were supplied to Robert and Catherine Birch in the 1770s for their home near Dublin, Turvey House. Duality resolved. John reminisces, “I picked up fragments of historic wallpaper from the derelict Turvey House, just before it was demolished in 1987.”

Onwards to the Milanese gallery Carlo Orsi which is celebrating winning object of the year, a 1920s bronze cast by Adolfus Wildt. But we are there to see Interior of Palazzo Lucchesi Palli di Campofranco in Palermo, an exquisite oil on canvas. Elegant Roman gallerist Alessandra di Castro remarks, “Oil is much more sought after than watercolour. This important aristocratic residence was the townhouse of the Duchess of Berry.” She understands the painting to be by the early 19th century Neapolitan artist Vincenzo Abbati. “It’s a wow picture!”

“The layered curtains filter the light through the open windows, imparting a soft indirect radiance to the room,” observes John. “The red banquette type seating, white chimney board and green painted frieze combine to form a most stylish Sicilian neoclassical interior. It forms the setting for a beautifully hung significant collection of paintings.” Guercino, Stomer, Titan: all the greats are represented. “My life is crowded with incident. I’m off to a bidet party in Dresden.” In between, he’s restoring Marino Casino, Ireland’s finest neoclassical building.